Vietnamese Traditional Wedding Ceremony From The Eyes Of Jewish

Both Jewish và Vietnamese have their very own distinctive traditions which are completely different to each other. What interesting about Vietnamese culture is that there are some customs that have been formed for hundred years and continued till modern times with no sign of being neglected. No matter if they are a Christian or a Buddhist, there are some Vietnamese traditions that can be missed. One of those is the traditional wedding customs including: Ask for the bride Ceremony and Pick up the bride Ceremony.

Talking about the background of the couple, the bride – Thuong is Vietnamese. She – was born and raised in a rich cultural family in Hanoi – the capital of Vietnam. Growing up, she turns into a modern, international women. Thuong travels a lot and has spent years living in Singapore, Isreal, America and other countries. She met her husband – Max in America – a young business man who is successfull at a very young age. Max was born and raised in America and he is a Jewish.

Ask for the bride Ceremony is the Vietnamese wedding traditional ceremony that is equivalent to an engagement on the couple’s marriage between the two families.

Last October, Max and his family had come a long way to Vietname to officially tie the knot with Thuong. Among of Max’s family and friends, this is the very first time they came to Vietnam and of course, the very first time, they attended a Vietnamese traditional wedding ceremony.

After the ceremony, we had some questions for Max and his family about how they feel about the ceremony. We got some very interesting answers.

Here is Evan’s thoughts on the ceremony. He is the father of Max – the groom.

Max and his groomsmen wore “Áo Dài” – traditional costume of Vietnamese in the Ask for the bride Ceremony. Their Áo Dài were tailored months before the ceremony.

FROM THE FATHER OF THE GROOM

“For me, the traditional Vietnamese wedding was the highlight of our trip to Vietnam and I am very grateful to Ong Thien and Ba Ha (the parents of the bride) for making this possible. There were four aspects of the ceremony that made it special for me:

The groomsmen have an important role as they assist the groom’s family to carry the gifts to the bride’s house.

The bride family welcomes the groom family in front of their house. In this ceremony, women will wear Áo Dài while men will dress with a suit.

The bride’s family’s acceptance of the gift signifies their approval of the marriage. The bridesmaids will take the gift from the groomsmens.

“First was the focus on family. On opposite sides of a long table sat two families who were more dissimilar than similar. It didn’t matter that both families did not speak the same language. It didn’t matter that the two families came from completely different cultures and wedding practices. What transcended these differences to bind the members of each family together on the wedding day was their shared love for the couple. The gathering at the table and the exchange of remarks reinforced the belief that the marriage is more than two people coming together. It’s a marriage of two families.”

At the “Ask for the bride Ceremony, the two family will officially meet each other, sit down together and talk about the marriage of the couple.

“Second was the observance of tradition. From the procession to the Ao Dai, the giving of the gifts and the exchange of introductions and remarks by the family, the Vietnamese ceremony offered a rich set of traditional practices. The Ao Dai of the bridegrooms and the bridesmaids were truly celebratory but my favorites were the Ao Dai of the bride and groom. For me, the bride’s phoenix represented the continual re-birth and never-ending duration of their love and the groom’s dragon meant to reinforce the strength of the couple’s love. The symbolism of these traditions gave the ceremony a heightened sense of significance.”

The representatives of the two families ( in most case, will be the father) will have some speeches, introducing their family members and talk about the main purpose of the ceremony. The families will make an announcement about the couple’s marriage to their extended families.

“Fourth, I tried to learn how to speak enough Vietnamese so that I could recite my part of the ceremony in Vietnamese rather than in my native English. I felt that extending this effort was a special way that I could show my respect and thanks to Thuong’s family for hosting us. I was surprised how difficult it was to learn the correct pronunciation but that made it all the more valuable.”

During the Ceremony, the bride will stay in her room. The groom will come to her room and pick her up after receiving the acceptance of her parents.

“Unlike the Jewish wedding, the Vietnamese ceremony had a formal procession, an exchange of gifts and at least a figurative gesture of the bride coming to the groom’s house. Despite all of these differences, at the core are common principles that a) the union transcends the two individuals and encompasses the family as the central unit and b) the practice of traditions that have evolved over centuries enrich the event. Each family shares a strong commitment to the importance of family and enjoying a life with rich cultural traditions.”

That is the Evan’s thought on Vietnamese traditional wedding ceremony and his son – Max – the groom also has some of his own thoughts on his Vietnamese. Here is his answers on some of our questions about the ceremony.

Max, can you share with us  the differences between Vietnamese and Jewish wedding customs?

What is the thing that you find most interesting ( or meaningful) in the Ask for the bride Ceremony?

The “ask for the bride” and the “don dau”ceremonies emphasize a lot that the marriage is the joining of the two families; and the ceremonies themselves are more about the two families, not just about the bride and the groom. I think that is a very important thing to remember.

Do your friends and your family share any of their thoughts on the Ask for the bride Ceremony. Did they enjoy it?

My family is beyond happy. It was a very unique experience to them. Everything was so colorful, Thuong’s family and her Vietnamese friends are very friendly and welcoming, we got to participate and understand the Vietnamese traditions. Everything was new to us, we’ve never experienced anything like this before. My brothers were really excited to carry the tráp on the xích lô, my mom loved her Ao dai; she was amazed by the skill of the tailor, my dad was very honored to lead my side of the family at the ceremony. And the rest of the family enjoyed every minute of it. It was definitely one of the most important and special experiences for my family so far.

I see you wearing the Ao Dai – Vietnamese traditional costume. What do you think about it?  Do you feel comfortable in it :D?

I love the Ao Dai, I am very happy that I get to wear one – and wear it with the hat! It is important for me to show respect to Thuong’s culture this way. I also think the Ao Dai has more “personalities” than the western tuxedo. It is very colorful, and it is very comfortable to wear. I hope to wear it again at traditional Vietnamese occasions.

What did you think when you saw your bride in the Ao Dai?

It was like an expected surprise. I’ve never seen Thuong in ao dai, only in modern, casual clothes. I’ve seen her mom, her friends in Ao dai – through photos Thuong showed me; but I can not imagine someone who is very international like Thuong in such a traditional outfit. She looked so beautiful in it! When I saw her, I saw a beautiful Vietnamese lady and I totally understand why she has been insisting to have a custom-made one and why she’s been so excited to put it on.

We find it interesting to see Vietnamese traditional wedding ceremony through the eyes of foreigners who has completely different cultures and customs. And what beautiful here is that no matter how great the diferences in cultures of a mixed couple are, they still find empathy, respect and a strong connection between them. 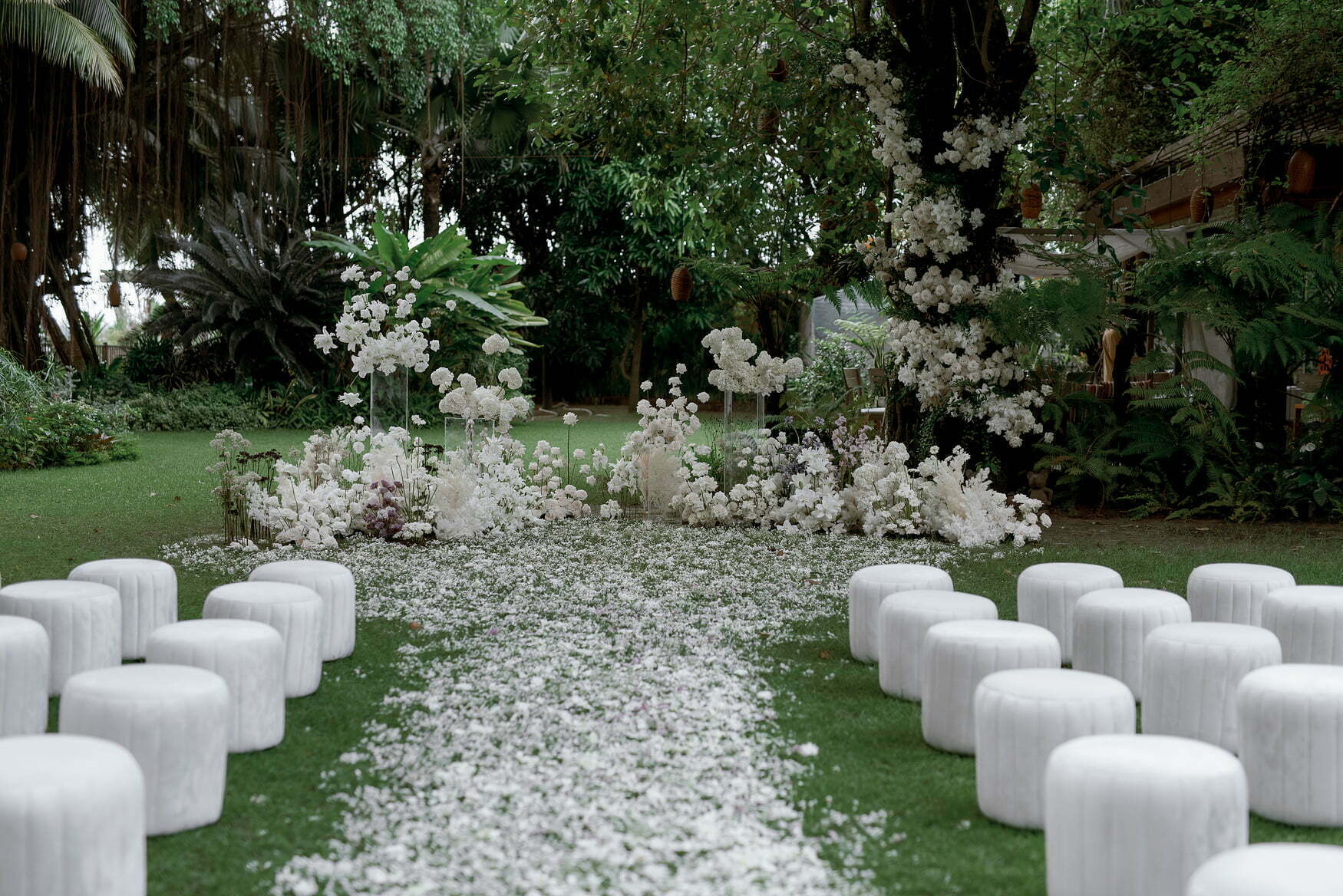 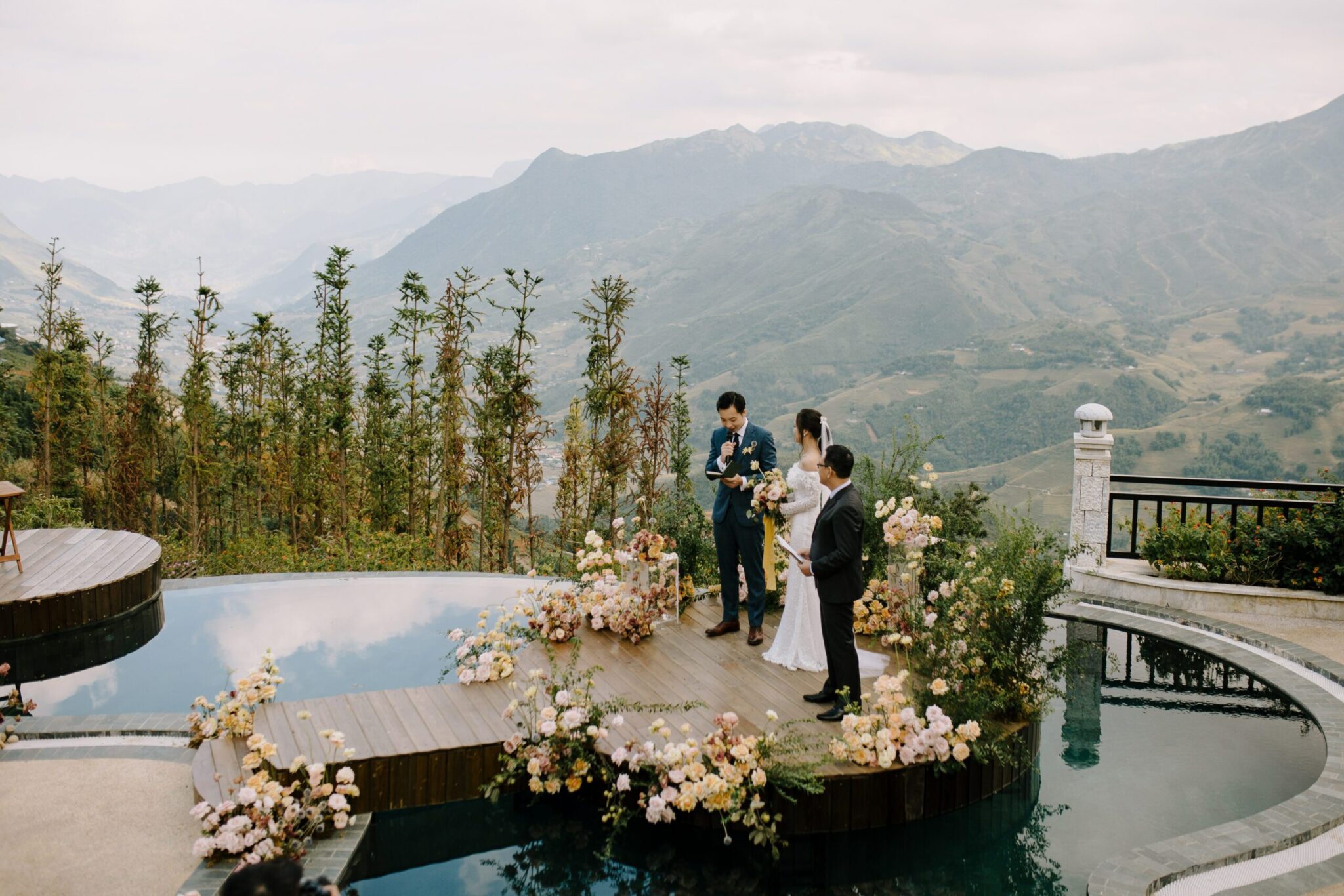 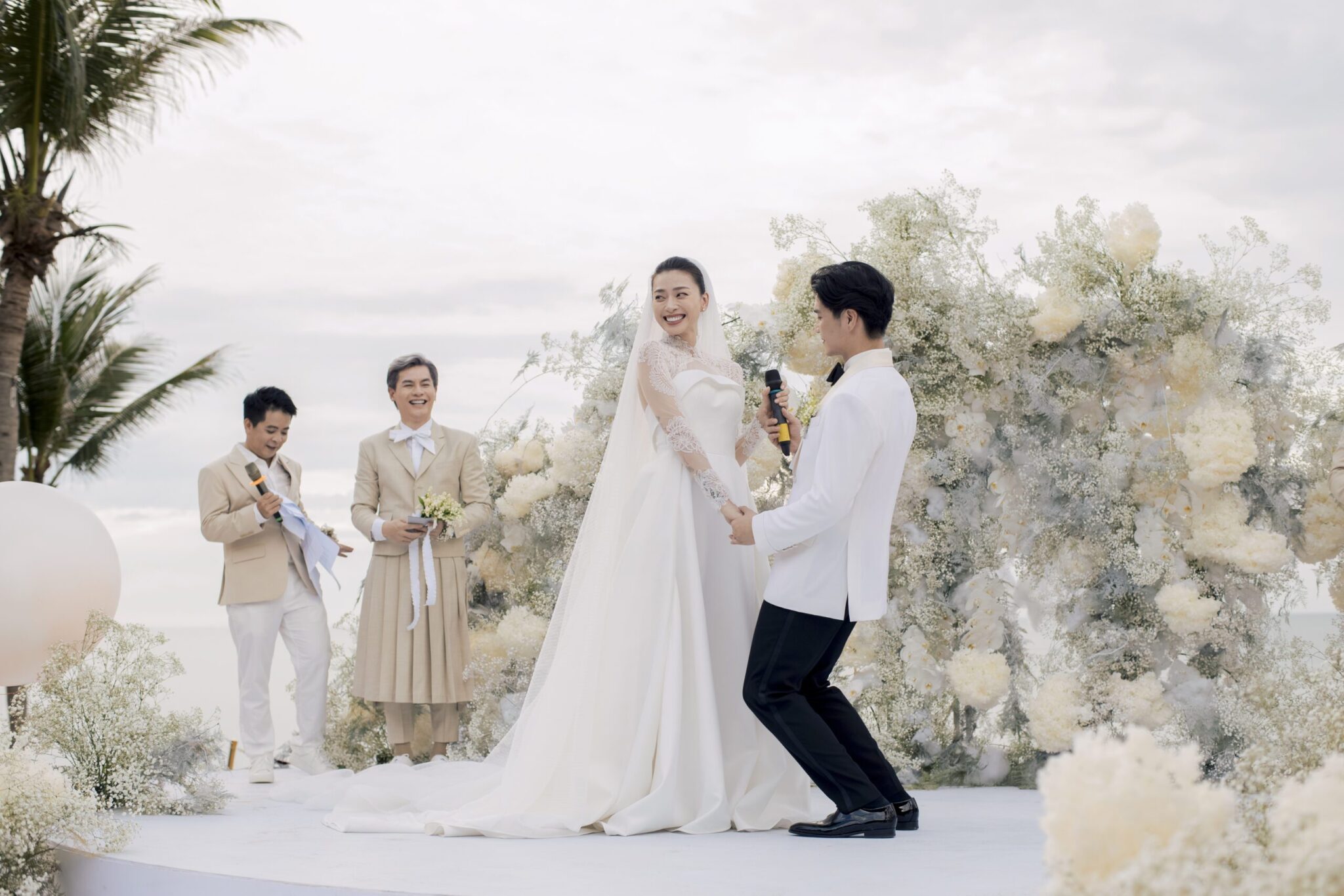 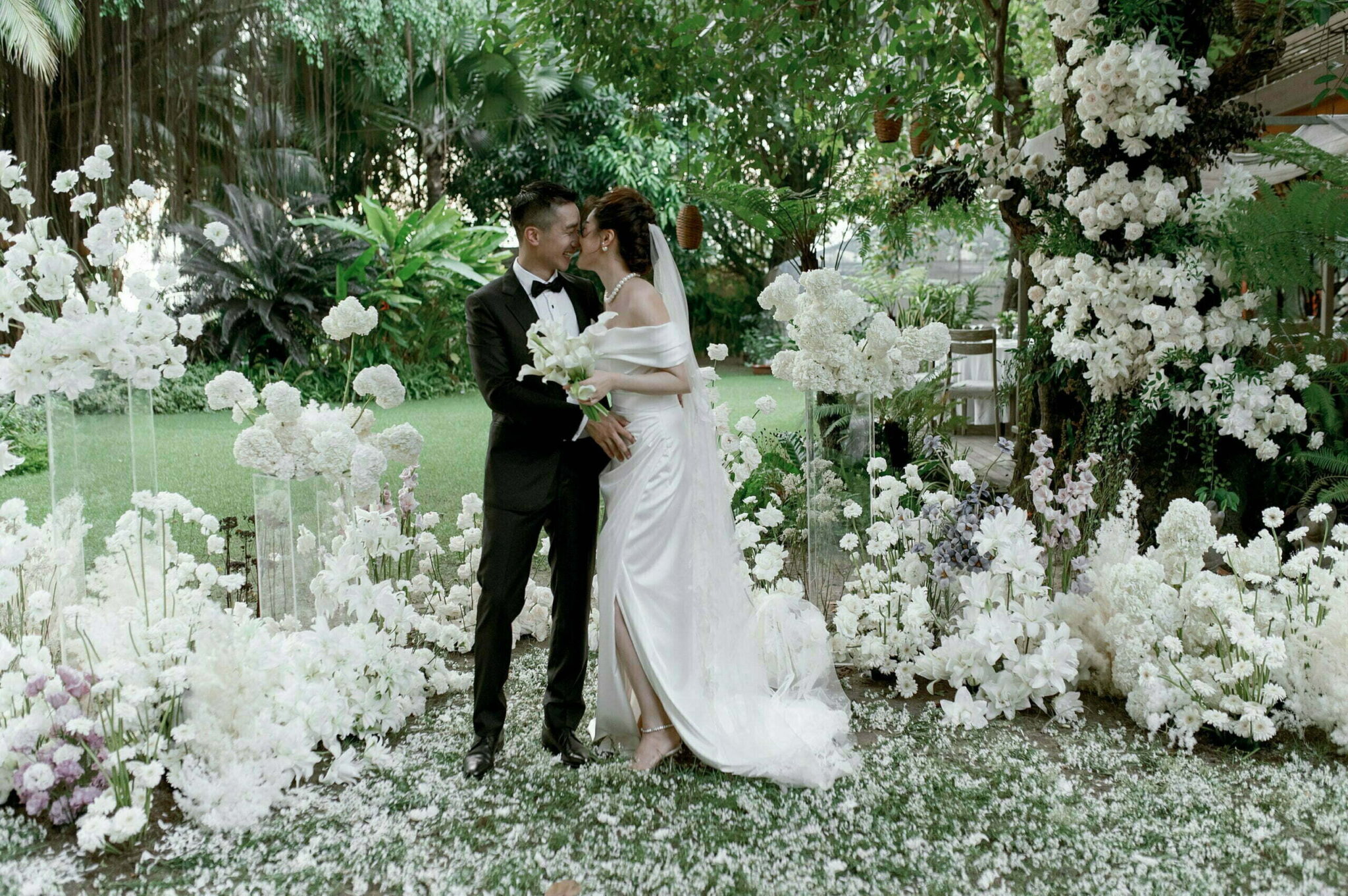